This is a super Heuchera , appropriately called ‘Marmalade’ that I bought last year. I love heucheras and I love marmalade- so what more could a person ask for?  They are such undemanding plants and have spires of tiny starry flowers in early summer. I like them because they are clump-forming  – and they look beautiful in the rain too. 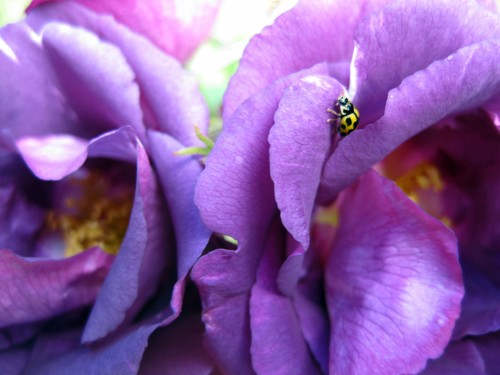 I’ve shown images of this lovely rose  here before – Rhapsody in Blue – but this time it had a visitor. It looks like a ladybird, but it is yellow and black, so that has thrown me a bit!  Anyway – as yellow is the complementary colour to the purple rose [on the colour wheel] I thought it looked rather nice. The bug isn’t as sharp as it might have been ‘cos it was on the move the whole time ….

I thought I would throw this one in rather than make it a new post ….  it almost looks like the snails and debris are on the sea shore, rather than on the paving in the garden – just a bit of flotsum and jetsum.